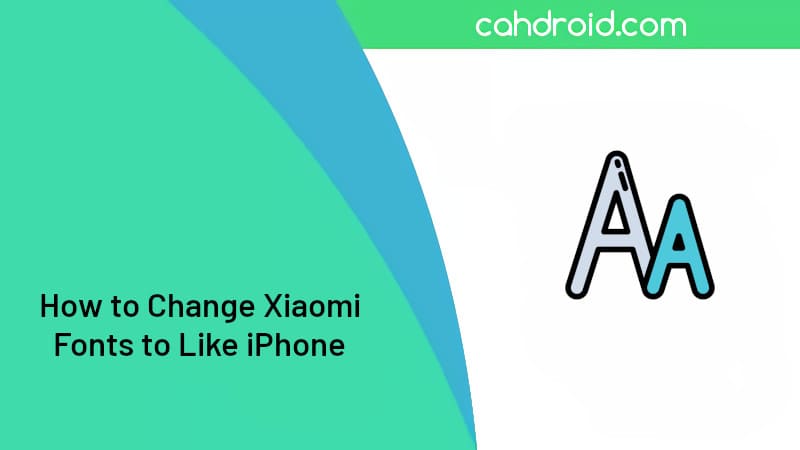 CahDroid | Are you a Xiaomi phone user? Tired of the original font display on your smartphone? Well, follow the tutorial below to change the font of the xiaomi phone to be like the iPhone.

Xiaomi phones are one of the most popular mobile phones used by many users today. If anyone asks why Xiaomi phones can be this popular, the answer is of course simple because the price is quite balanced with the specifications embedded in every cellphone made by Xiaomi. Not only that, Xiaomi is also known as the 3rd largest smartphone distributor in the world.

Another basic reason, it could also be because Xiaomi phones have more advantages when compared to other vendors.

Xiaomi has a system named MIUI. MIUI itself is famous for its pretty attractive appearance. In fact, many Xiaomi fans are free to customize their cellphones so that they look more attractive. There are many customizations that can be done starting from the menu display, wallpaper, ringtones to fonts.

As smartphone users, we will certainly be bored if we see the same font display on our favorite cellphones. Fonts are indeed the main attraction on the Smartphone display.

Well, like the title above, our Xiaomi phones are equipped with a feature to change the font. For those of you who are already bored with the original font, now is the time to change your regular font to be like an iPhone.

1. First you can open the Themes application on your Xiaomi smartphone. Next, please select the T icon in the bottom menu bar. Then tap on the search field.

2. Look for a font called ‘Realiox’ and select the ‘Realiox 13 Bold’ font. Then you will be directed to a preview of the Realiox font, tap the FREE button to start downloading.

3. After the download is complete, tap the Apply menu then a pop up will appear, tap Reboot to start using the font. In addition to using the theme application, you can also use other methods by going to the Settings menu and selecting Display.

4. On the display menu select Font, after that you will be forwarded to a page like the theme application and you just need to find and download the font you want to use.

The user interface of MIUI does have its own characteristics. However, maybe many of us don’t like the look of the original font model provided by Xiaomi dev. For that, you can do the above method to further beautify the appearance of your smartphone with fonts like the iPhone without using third-party applications.